“Pokémon Go for Business” is a new ebook dedicated to helping every consumer facing business attract new customers. Well researched and full of specific, qualified ideas, the book helps explain the mobile game obsession to those who may never have heard of Pokémon before. Most importantly, it breaks down marketing ideas based on specific criteria, such as: Lure Modules, Gyms, and five distinct business types (e.g. Active Shopper, such as a retail store).

Included with this book are free Pokéstop icon templates (external download) and an employee handout (external download); the resources you need to get started DOING, not just thinking. The first layer of the table of contents is listed below for your convenience: 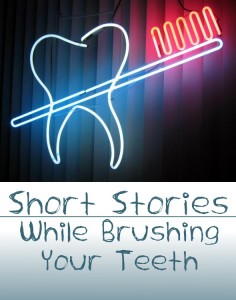 Hot off the heels of my 30 day short-story-a-day challenge, I’ve compiled all of them into a book called, “Short Stories While Brushing Your Teeth”. You can download the ePub file completely for free right here:

I’m also releasing it at as a Kindle Lending Library exclusive for a few months, so you can get it for your Kindle through Amazon (free for Prime members, otherwise $0.99).

As a reminder, every other e-reader, tablet, phone, or e-book reader software is designed to work with ePub formatted books, so grab the download from the link above as soon as possible! I wrote a <600 word short story for NPR’s ThreeMinuteFiction, and since it didn’t win, I get to publish it for FREE. Download it or read it below and let me know what you think! The cover is a photo I took a year ago in Australia.

Jaryn squeezed his eyelids tightly; everything was still washed in a bright white glow, but it was slowly improving. He couldn’t say the same about his stomach, which was churning at an uncomfortable pace. Jaryn had managed to keep from evacuating the contents of his stomach on the last test run by sheer force of will, but his eyesight and disorientation made it much harder to focus his mind.

A piercing tone echoed around the chamber, causing Jaryn to rear his head into the thick glass side. He winced and groaned, “Maybe this wasn’t a good idea.” The tone rang out again, and Jaryn let his weight lean against the glass as he slid his body down to the ground, groping along the floor with his unpinned hand in search of the screeching source. His hand grazed the smooth surface of the device and clamped down around the small disc, his trained instincts flipping it over in his palm and depressing the small button on the bottom, interrupting the third tone mid-chime.

He squeezed and opened his eyes again, peering around at the dark shapes scattered along the landscape: the structures of the colony. There was an eerie quiet to the place and no movement that he could make out. Between the pained expressions, Jaryn looked confused. He had expected a welcoming party, a team of scientists, somebody to receive him when he arrived. These were the rules of beam transportation for living creatures: both sides needed a person in the chamber for the transposition to be successful. He had left the station with a team around him, and if he was here, then the man he replaced must be back at the station.

He tried to focus his eyesight, flipping the device back over in his hand as he peered at the small green readout: 71h,58m. On schedule, as expected. His focus widened for a moment and noticed a smudge of color on the fingertips of his middle and ring fingers. His brow furrowed as he concentrated his gaze.

Jaryn quickly released the device to the floor, landing with a metallic tin and a dull splat. His body slid up the glass quickly, as his hands began checking every inch of his body from toe to neck, trying to find the source of the blood. His breathing quickened as a mild panic took over his mind. He exhaled forcefully in relief, as he found all of his parts were intact and he lacked even a mild scratch. His eyes were mostly clear now, and as he looked at the chamber around him, he wasn’t sure if he would be standing here, alive, three days from now.

After a successful launch promotion (2000+ downloads of the novella), I wanted to talk more about book marketing. First and foremost, the version downloaded during the promotion had a special note before and after the story. The note was a personal note from me recommending a few different methods for the reader to reciprocate if they enjoyed the story. This included purchasing a copy, adding a review on Amazon or other online bookseller, and spreading the word to other fans. If the fans enjoyed the story, they will want to reciprocate, and the only way to get that message across is within the book itself.
END_OF_DOCUMENT_TOKEN_TO_BE_REPLACED

Today I have officially launched my third book, first fiction, My Zombie Body. I started it during National Novel Writing Month in 2009, affectionately known as NaNoWriMo. After getting through part of the story, I went away from it for too long. I finally picked it back up, wrote the rest, edited it (over and over), and passed along to others for feedback and some editing. Today, October 18, 2011, it is now released on the world in digital form. The paperback will be coming in November (those take a little more work).
END_OF_DOCUMENT_TOKEN_TO_BE_REPLACED

When doing my second round of edits for my latest book, Trapped in My Zombie Body, I needed to attack from a different angle. The first round was a straight reading (out loud) for continuity, flow, spelling, and grammar. It took 15 minutes a page, which was 16 words per minute. The next round was to find simple mistakes for words that were commonly mistyped: