From February 18 through February 23 2004 I had the opportunity to visit London, England through a 3-day British Airways sale: $100 each way in honor of the Wright Brothers. Today, I found a .doc file that I had written and forgotten about for the past 8 years. It was a recap of the trip, the laughs, and the adventure. Below is that text, unedited.

This is an effort to record my experiences and impressions on the short trip to England. This is just some basic memories to be recorded, followed by a more in-depth look at what I learned in the process. 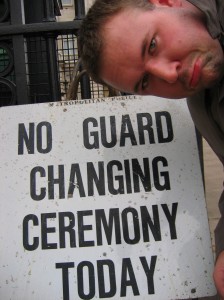 We got upgraded to 1st class on the way out thanks to my brother getting the ‘hook-up’… I guess being a firefighter has its privileges. There was more space definitely, and a few more freebies (open bar, warm towel, full gift toiletries bag), but the movie selection was the same, and the amount of food was the same, just a little ‘fancier’. I’m not much for lobster, so that didn’t matter… of course, I wouldn’t know, I fell into a cold sweat after the appetizers and had to force myself to sleep and miss out on the rest of the meals… better idea than staring down a toilet for 6 of the 8 hours.

In King’s Cross National Rail Station, between platforms 9 & 10, the Brits added 9 ¾ platform… an arch and a brick wall… a clear homage to the success of the Harry Potter books/movies. Neat.

Speaking of things that move me: At the back of St. Paul’s Cathedral, behind the choral area there was, emblazoned upon a scroll on the floor, a dedication to the Americans who gave their lives in WWII. A large book with names (encased in glass) was also present. I was touched that England would put such a dedication in a location as important to Britain as the White House is to the U.S.

Service in England is everything people say: lousy. I take that back. See, if its service where you order at the bar, someone brings out the food, and then someone else picks up the empty plates, it works perfectly. But if it’s a full service restaurant, forget about it. More on that later though.

The tube, otherwise known as the Underground, rocks. Mind the Gap. It makes it so easy to get around; it’s just brilliant (Brits love that word, as well as Fantastic). We won’t mention the price because we were at a bit of a disadvantage (we being Myself, Alex, and his buddy Mickey). The dollar and the pound were at a 2 to 1 conversion rate… that’s right, for every $2 you got £1. That sucked. 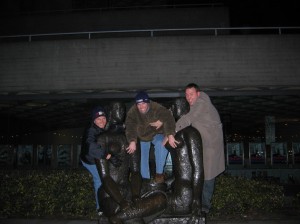 Space. No, not the kind with stars and planets, but space as in how much space you take up. Face it, the U.S. is a HUGE amount of land, and we have no problems making use of it all. If the U.S. used space like the English, we wouldn’t need anything past the Mason-Dixon line. We stayed in a hotel that was £135 a night (we got it for £78), three beds, and about the size of my current room… maybe 14×10. The bathtub was funny, and a source of complaint, since you couldn’t stand in it without the sides curving up… you had to stand sideways just to get your feet flat. That damn curtain too… c’est la vie.

Drunk people in the U.S. barely get themselves to a bathroom, and they wouldn’t survive in London, where in one restaurant, the bathroom was through 2 doors, up stairs, turn corner through another door, up more stairs, another door, a hallway, then 2 more doors.

The wind of the river Thames is crazy… ok, I’ll say it: it was off the chain. It may have been 40° out, but that wind chill was nuts. By the way, convert C° to F° by multiplying by 9, dividing by 5, and then adding 32. Figuring that back out took me the better part of a day… it shouldn’t have, but it did. It snowed too, as we got off the train in Cambridge on Sunday night. It was a seemingly magical end to it all, not counting the craziness that ensued at 1:30am.

We went to a club Saturday night, but because it was half-term, and Cambridge is a college town, the place wasn’t as hopping as we thought, and at midnight, when we arrived and checked the 3 clubs, most were stopped at the door, with a line, and doing 1-1… 1 in, 1 out. The 3rd club we got in, but after paying £8 for cover, £1 for coat check, we discovered why, on this night, no one was there. 3 floors of music, 4 floors total, and it was awful. As Danielle put it, this was not typical for this place, but all we could think of is “Why us?” Techno, 80’s, and just crap was the selection. 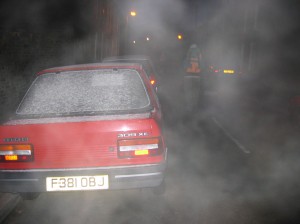 Being a server now, I developed an interesting viewpoint on the whole thing, more so when I returned to work at Toojay’s Tuesday. Customers in the U.S. are arrogant, demanding, and definitely take things for granted. I probably have done so as well a little, and it is a comparison of best to worst, but still. I am starting to understand more and more why my father talks about Americans attitude and behaviour the way he does, especially in comparison to Europe. It’s pretty disgusting in a way.

Escalators: Love it in London. If you were standing on it, then you stood on the right, so those who wanted to walk on it could pass on the left. Roads: on the ground it was written: Look Left or Look Right. Quite useful in a town of one-way streets and everyone driving on the opposite side than I was use to.

I had a great trip, with lots of laughs. Mickey was endless analogies, and all of us were endless laughter. Would I go back? Of course… but I think I’d go with someone that I could enjoy a night’s walk on the river with…