As of this writing, the Kickstarter project “Clang” has 10 days left to raise another $153,817 to succeed and take everyone’s money. I hope it never gets there. 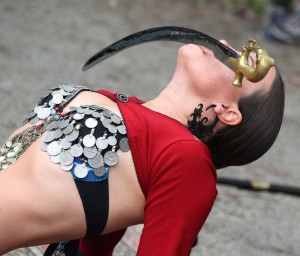 The project has a big name backer in prolific author Neal Stephenson who, to his credit, has been very supportive about the ongoing debate within his Kickstarter comments section regarding the scope and feasibility of what he is trying to create: a true-to-form swordfighting game. Also, the ever growing FAQ for the project has attempted to address many of the concerns and questions by visitors, backers, and doubters. The most recent salvo is over the Kinect Disconnect, which is described in video form through this Penny Arcade video. From almost every standpoint, this project is doing everything right. The project has a well-known individual standing behind a high dollar value goal, they are responsive to questions from the public, transparency about limitations based upon the financial scope is prolific, and the project consistently maintains its character in the face of opponents. It’s respectable, intelligent, and upfront… and you still shouldn’t give them your money.

It’s funny about the project’s lofty goals being compared to the robotics hypothesis of the uncanny valley, because the more involved in reading and learning about what they are trying to accomplish, the more I feel repelled by the idea of giving money to the project. They have gusto, I’ll give them that, but what they lack is the ability to deliver. See, Neal Stephenson is an author with an interest, and he’s explored this interest to a large degree in the real world. However, him and his team wish to take that knowledge and magically transform it into a deliciously accurate video game using existing hardware developed by others. I realize the use of magically in the previous sentence may seem condescending, and that’s for good reason, but it’s not towards the spirit or the people, but rather their lack of realizing how very large the gap is between their dreams and the reality.

If you’ve seen Indiana Jones and the Last Crusade, there is a point where Indy is standing on a precipice, and as the camera pans out you see that what seemed reasonable at first glance is actually a very large gap that no man could cross in a single leap. It’s startling, but it’s a realization that causes the main character to reconsider the solution to the problem. It ends up be a leap of faith as he steps forward into nothingness landing on a nearly invisible walkway, ala Criss Angel walking on water. What the project is asking from its backers is to take that leap of faith with them, as all project creators do. However, I’m sorry to say that I can’t. I don’t believe that there is enough substance there for this goal to succeed, given the time, money, and scope allocated to the endeavor.

So here we come to my point. Kickstarter has been flooded lately by big names with big monetary goals, and usually this faith is warranted. These projects have raised many multiples of their original goal because people believed they were capable of delivering on their promises and beyond. The doubts I’ve expressed are reflected in the current state of the Clang project’s funding, and as much as it hurts me to wish ill-will on someone, especially a Kickstarter project, I really hope it fails. The project is not good enough, and as Kickstarter is leaving puberty and entering its college years, it needs to take responsibility as a community able to determine the difference between a notable project creator and a worthy project. In essence, crowdfunding has to mature, and in this case, at the expense of a project I really wish I could believe in.