Over 400,000 individuals have seen the website; the one-liner website that makes you laugh when it presents the unexpected. I’m talking about DefendRush.org, a website I built in a stroke of frustration. There is a much more eloquent write-up of my reasoning for creating the website on The Atlantic, if you’re interested. As the Executive Producer of The Daily Show, Rory Albanese, said during the Political Humor 2.0 panel, sometimes what amuses the audience the most is as simple as a poop joke. DefendRush.org was my poop joke.

What I wanted to add to the discussion was the background metrics and traffic trends that occurred for the website in the 7 days from creation on March 7th through the peak of its traffic 48 hours later. Hey look, a graph! 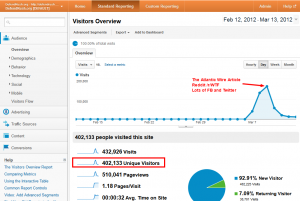 The site started as a submission to Reddit.com’s subreddit /r/funny, where it slowly climbed to the top 27 of that subreddit, just shy of its front page. In terms of Reddit overall, this put it in the top 125 submissions ~9 hours after it was first submitted. The traffic grew to 3 visitors per second from that traffic alone and became my most upvoted submission ever. In retrospect, I could have probably hit the front page if the title was, “DefendRush.org brings up some great points” but alas, hindsight. However, the magic of the website was as a link on Facebook, and that’s where the next wave took off.

I should say, at this point, it was 24 hours after the initial submission, and I decided to add a ‘Created by’ link to the page. This was probably the best decision I made through this entire event, as it lead to the email, phone call, and subsequent article in The Atlantic (linked above) that was incredibly flattering. The traffic was now driven by Facebook Likes and Twitter Tweets, and it was gaining steam for the second day. By the time I found myself in the badge pickup line at South by Southwest (SXSW), the site was getting 5-6 new visitors every second. It even had a resurgence on Reddit through another submission, though this time to the subreddit /r/WTF. It all combined into a perfect storm of traffic.

Sidebar Speaking of traffic, the website was a simple HTML page, with the only image on the page being served by Amazon’s Cloudfront service, keeping the page very fast and keeping the load off of my web server. See, while it was great to get all of the traffic, what wouldn’t have been great is if it brought down my server, since it powers all of my other website projects that actually generate income for me. Luckily, it seems, I thought of everything.

The rest of the week was a slow decline of traffic and a slew of emails to my public email address, the majority of them positive. I did reply to all of them, even if it was simply a polite thank you. You see, since Rush Limbaugh and politics is a polarizing issue, I saw no need to instigate more people. It fell into line with my motto last week, “It’s not worth it to be mad or upset. Move forward and be happy.”

So what’s the takeaway from this minor moment in internet history?
The domain cost me $10 to register, the Amazon hosting fees for the image was about $1.50, and about $5 in cell phone charges ($0.18/minute for my Virgin Mobile pay-as-you-go plan). So, for $16.50, I got to laugh along with 400,000 strangers and got an interview with a notable publication (Jen Doll, the author, was also fantastic to talk to for the 30 minutes we spent on the phone). Worth it? Damn right. By April it will disappear into the ether that is the internet, but for one week, I was responsible for a viral website that made a lot of people literally laugh out loud.

I can be proud of that.